“The first work by Michael Thompson I ever layed eyes on was my face on a poster, the way I looked when I was half the age I am now. As it turned out, I got to meet the artist himself a few weeks later. He came to see me, bearing gifts; two splendid prints, one of my portrait and the other, a poster for the Alpha School in Kingston, about which I’d heard much from Horsemouth, another illustrious alumnus of that miraculous institution. It is a simple composition, in black, silhouetted against a crimson background. A young boy, his trombone raised, pointing almost straight up, his head all the way back, is about to blow the first note. But what reveals Michael Thompson’s keen artistic insight is the empty chair behind the boy. The lot of the student, to sit in that chair and learn. The chair now left behind. The boy might not have wings, but he is about to fly, his trombone pulling him up into the heavens. It is like that with all of Michael Thompson’s work. An emotional reward awaits you every time you look at one of them. The incomparable portraits of national heroes and reggae’s great legends, not only the stars but the foundation builders; The Great Sebastian, Prince Buster, Sir Coxsone, King Tubby with his crown… you are not looking at a skillful adaptation of a photographic image, you are looking at the face of a life. Or a scrawny kid dallying on his bike, dreadlocks inside his bulky tam, living from moment to moment like a leaf in the wind.” – Ted Bafaloukos (Director of Rockers) 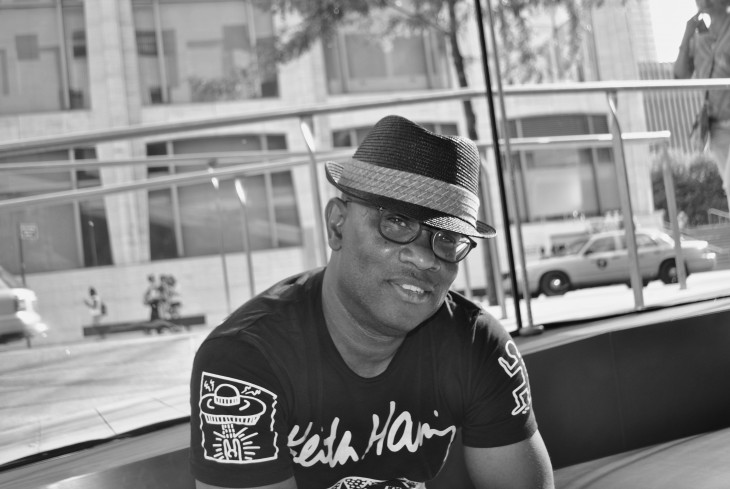 Michael Thompson (aka Freestylee) was born in Kingston, Jamaica and is now based in the small city of Easton, Pennsylvania, United States. He studied graphic design in the early 1980s, at the Jamaica School of Art, now called the Edna Manley College of the Visual and Performing Arts. Of the many artists that influenced Freestylee during the formative years, few did more than the Rastafarian artist Ras Daniel Hartman. Hartman’s prolific output of drawings in the 1970s represented for Freestylee a rich source of Rastafari references and traditions that were growing deep influences on the Jamaican popular culture. Freestylee’s influences were not, however, exclusively Jamaican, or the Rastafari movement. Like other young progressive artists in Jamaica at the time the anti-apartheid struggles and liberation movements in Southern Africa were very inspiring, so were the struggles in Latin America. The subjects were evident in his earlier personal designs, drawings and paintings (1970s – 80s). During that period, he won two successive poster competitions in Jamaica, which gave him the opportunity to participate with the Jamaican delegation in the 11th World Festival of Youth and Students in Havana, Cuba in 1978, and again in Moscow in 1985. He describes his visit to Cuba as “a transforming experience and a tremendous opportunity.” There, he was introduced to the Cuban poster art created by ICAIC, (Cuban Film Institute) OSPAAAL, (Organization for Solidarity with the People of Africa, Asia, and Latin America), and Casa de Las Américas. Freestylee’s visit to Cuba, and his exposure to Cuban posters created by designers at these organizations greatly inspired his poster design aesthetics.At present, his main field of design centers around poster art, graphic design, brand illustrations, and presentation art. It is in the field of poster art that Freestylee’s work is recognized internationally. Freestylee sees his poster art as visual narratives that explore the many facets of global struggles of the underclass and believes in giving back to the community and the world through what he calls Creative Activism and Social Design. Freestylee’s Creative Activist poster designs possess a modern liveliness in the pieces, with exuberant and colorful imagery, accompanied by forceful illustrations. Freestylee uses his art effectively with social media to stimulate awareness globally, and to spark conversation about many social issues. He uses poster art to express solidarity or protest issues that he feels passionate about: global poverty, racism, anti war, migration policies, peace and justice, Pinnacle and the Bob Marley “One Love,” themes. He also designed numerous posters celebrating and promoting the historical and popular cultural Jamaican heritage. Such topics explore Jamaica’s popular musical genres; Reggae, Ska, Rocksteady, Dub, Dancehall and the Jamaican Sound System. An example of Freestylee’s social activism is the successful International Reggae Poster Contest which he envision as a platform for a catalyst idea; the centerpiece of his vision is reggae, and his ultimate goal, is to to see a Frank Gehry caliber Reggae Hall of Fame Museum erected in Kingston, Jamaica. This intuitive also help raise awareness for Alpha Boys’ School which has players a key role in the development of Ska and Reggae music. The International Reggae Poster contest has raised over US$10,000 for the institution for wayward boys.
Other posters have captured the evolution and revolutionary spirit of the “Arab Spring” and have received tremendous international press. These works have been published in numerous international magazines and Blogs, including the French magazine Straadda, German design magazine Page, and Graphic Art News. A notable mention is the Egyptian Revolution poster “Get Up, Stand Up,” a reference to Bob Marley’s defiant anthem, this poster was published in the UK magazine Arise 2011 and the African Digital Art website.

Freestylee’s reggae and Rastafarian posters have also drawn much international attention and have been published in the premier German reggae magazine Riddim. A collection of posters have also toured Europe as part of the Reggae Movement Exhibition in 2011-2012. The exhibition trace the journey of the reggae sound system from Jamaica in the 1950s to the UK and its growth in the 60s and 70s, and then spread across Europe. First showing at YAAM in Berlin in October 2011, and followed up at The Little Green Street Gallery, Dublin, and other European cities. Other personal exhibitions in 2010 included: National Gallery of Jamaica’s Biennale of Graphics in Kingston, Jamaica. Freestylee’s posters have also exhibited at the Drum Art Center, Birmingham, during the London 2012 Olympic Games and Jamaica 50th celebrations. Other exhibitions include Freestylee, Artist Without Borders, Rototom Sunsplash, Spain, Allentown Art Museum, USA and the “Edna Manley’s Bogle: A Contest of Icons” at the National Gallery of Jamaica. Recently his reggae and Rastafari works were exhibited in the Mexico City Metro, officially called Sistema de Transporte Colectivo, at two of the main metropolitan stations, Pino Suárez and Jamaica in Mexico City.

Freestylee’s awareness art is deeply rooted and inspired by the conscious roots reggae music of the 1970s and 80s. His reggae fused posters are fundamentally tied to the imagery and messages of that same period. He believes that the success of the genre is not by chance, but can be traced directly to the hopeful human messages that all people can relate to and the feeling of solidarity that goes with that. Freestylee is fully immersed in trying to capture the extraordinary energy of Bob Marley and others Rastafarian singers who took the music from Jamaica to the world. The success of reggae artistes like Burning Spear, Culture, Uroy, Abyssinians, Peter Tosh and the legendary Bob Marley is a reminder that positive messages in music is extremely powerful. What these great singers had to say to the world can also be translated visually as well and this is Freestylee’s mission, “This is the music and the musicians I grew up hearing in Jones Town, Kingston, and it is not surprising these songs from the period are the soundtrack of my life. ….Rastafari “levity” fueled by the mantra of Unity and One Love is still relevant today.”

“When Michael Thompson has ideas, they’re too big to be contained by political borders—they’re global. The Jamaican artist known as Freestylee, now based near Easton, Pennsylvania, has gained worldwide recognition for his powerful poster designs. Thompson’s social awareness and his design skills have led him to create moving visuals inspired by world events such as the recent Eqyptian revolution, the Occupy Movement, and Haitian earthquake relief. Current design technology and the web allows the artist the opportunity to express himself digitally to a global audience.” John Pepper Adult & College Programs Coordinator – Allentown Art Museum

The Reggae Hall of Fame Vision

The question of “why not?” a significant Reggae institution in Jamaica to celebrate and preserve the history and legacy of the music is ever present in my mind. The “why not?” question has haunted me for some time now and I ask myself what can I do as an individual to trumpet this obvious need and set in motion a flame to make this vision a reality.It is obvious that the Reggae brand is a powerful global musical phenomenon. The vision is clear to me, I’ve always felt and believe that Reggae music and culture are powerful forces for social change, and has had a positive impact on our planet. The First International Reggae Poster Contest is a platform to raise awareness and present this vision to the world, to see to the establishment of an iconic Frank Gehry style Reggae museum and performance arts space in the heart of Jamaica’s capital city, Kingston. Kingston was at one point the epicentre of the music and where the music was invented. From here the branches have stretched outwards around the world from Asia to Africa, Europe to America, Latin America and the Pacific. Jamaica must find a portal to leverage this powerful culture, to be beneficial to the communities of Kingston, and Jamaica as a whole. This vision can bring the center of Reggae gravity back to Kingston. It does not take a extraordinary imagination to see the impact a Frank Gehry built Reggae Hall of Fame will have on Jamaica and it’s fledging economy.The International Reggae Poster Contest is more than just a contest it is a sparking rod for a catalyst idea. This is a bold vision that will become a center piece attraction for music lovers around the world; a Reggae Mecca for reggae lovers. This vision will change the face of Kingston, and how the world view Reggae music. Help us begin the discussion and spread the word that big things are about to happen for Reggae music and all the related genre, i.e. Ska, Rocksteady, Roots Reggae, Dub and the unique Sound system.

You can see some more Freestylee’s poster art at: Flickr.