This compelling exhibition features 50 graphic posters designed by the Jamaican artist Michael Thompson aka FREESTYLEE artist without borders. Conceived as “ROOTS”, this vibrant collection of posters penetrates beneath the surface, reaching to the foundations of Jamaican culture. The original name of the island, Xaymaca, means land of wood and water in the Arawakan language. The fertility of the Jamaican landscape is matched by the richness of the island’s resilient culture.

At the root of modern Jamaica is a history of sustained resistance against forces of oppression. The Taino people fought valiantly against the rapacious European invaders. Later, Africans who were brought against their will to Xaymaca escaped enslavement, establishing Maroon communities in the mountainous interior. In the 20th century, the Rastafari movement emerged as a new wave of maroonage, with a vision of repatriation to Africa. And reggae music exploded as the sound track of the island’s cultural revolution.

This exhibition of Michael Thompson’s powerful posters focuses on two distinct themes. First, there is the celebration of the heroism of the Jamaican people: Queen Nanny of the Maroons, freedom fighter Paul Bogle and Marcus Garvey, Pan-Africanist champion of black people across the world. Jamaican culture in all its dynamism is honoured. The second theme of the exhibition highlights some of the festering global problems that need urgent attention. For example, Thompson’s evocative posters constitute creative resistance to the tragedy of war and forced migration.

In essence, “ROOTS” presents a substantive selection of Michael Thompson’s politically engaged posters. The exhibition eloquently articulates the artist’s mission to change how we look at the past and the present and how we conceive the future. Affirming the optimism of Bob Marley’s “One Love” message, Thompson’s poster art reaches beyond borders to embrace diverse cultures, establishing communities of empathy.

The workshop was organized by Phillips Exeter’s MLK Day Committee, composed of PEA students and employees, which seeks to honor Dr. King’s vision of building a “beloved community” by planning inspiring and thought-provoking programs about race and racism, civil and human rights, violence and peace building, and social and global justice.

PALABRA, PODER y SONIDO (“Words, Power and Sound”) exhibition opened to the Mexican public on November 19-2014 in the city of Chetumal, in Quintana Roo State, Mexico. One of the premises of the exhibition is the value and power of the creative poster art to communicate vision and bring cultures closer.  The large colorful posters were exhibited in the spacious gallery in the beautiful Museum of Mayan Culture. The fall exhibition features works by the top Jamaican poster artist and designer Michael Thompson aka Freestylee, the presentation was one of the final events organized by the annual Culture Festival Caribbean 2014, now celebrating its 40th year.
The artist Michael Thompson, along with Deputy Secretary of Basic Education, Lorenzo Olivera, director of the Museum of Maya Culture, Alfonsina Pardo spoke at the opening and explained the origin and development of the works, including three new works dedicated to Mexican National Heroes: Emiliano Zapata and Francisco Villa and Afro-Mexican freedom fighter Gaspar Yange.

Secretariat Lorenzo González Olivera, welcomed the large gathering to the opening, and congratulated the high level of artistic participation in all areas of the festival, and applauded the strong support and assistance of the public, he said “That tourists and locals alike have enjoyed the Festival in all 10 municipalities of Quintana Roo”.

Therefore, “we are pleased to close the festival here in Chetumal, with this important art exhibition connecting us with the city of Kingston, Jamaica” he said, according to UN Press.This collection of posters alluding to the visual history of the reggae world, and the colorful narratives of the music’s global journey, “the posters also pay witness to the Rastafarian culture founded on this culturally important Anglophone Caribbean nation.”

All 36 pieces on display are original works in the exhibition and narrates visually the history of reggae music and the global connotations of the music, some of the iconic figures represented in the exhibition were Bob Marley (1945-1981), Peter Tosh (1944-1987), and Prince Buster (1938), other posters featured historical figures like Marcus Garvey (1944- 1987), and Haile Selassie (1892-1975).

The curators of the PALABRA, PODER y SONIDO exhibition are Memo Mujica and Monica Vega of Culture Reggae from Mexico City, more exhibitions are planned for the State of Quintana Roo in 2015. 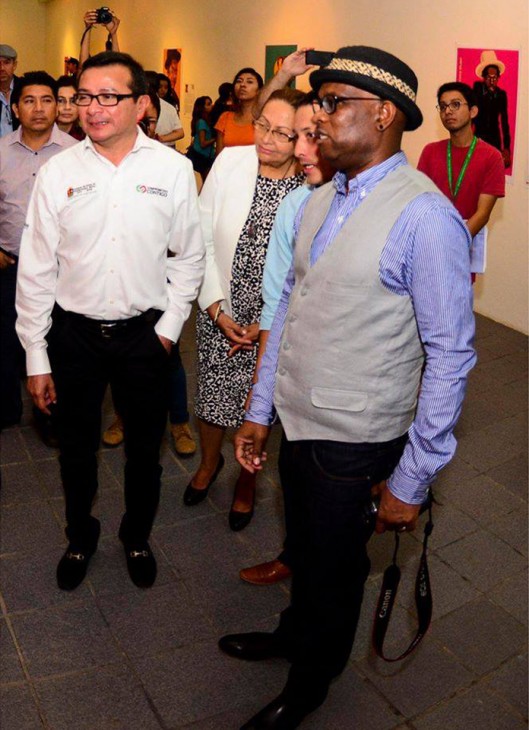 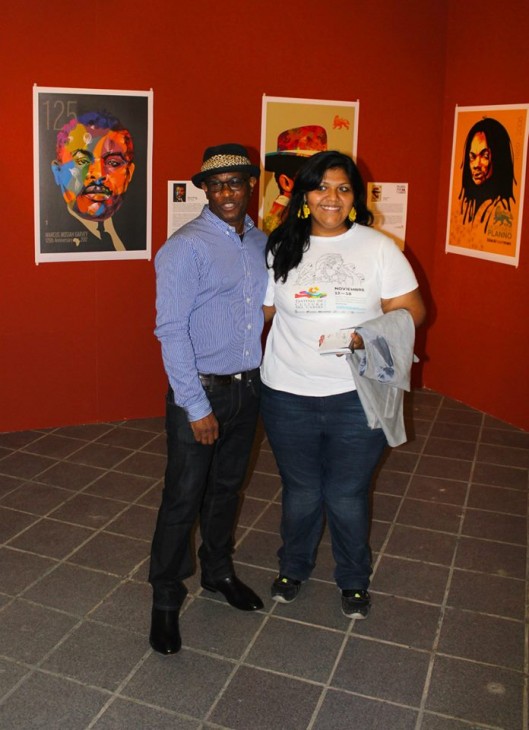 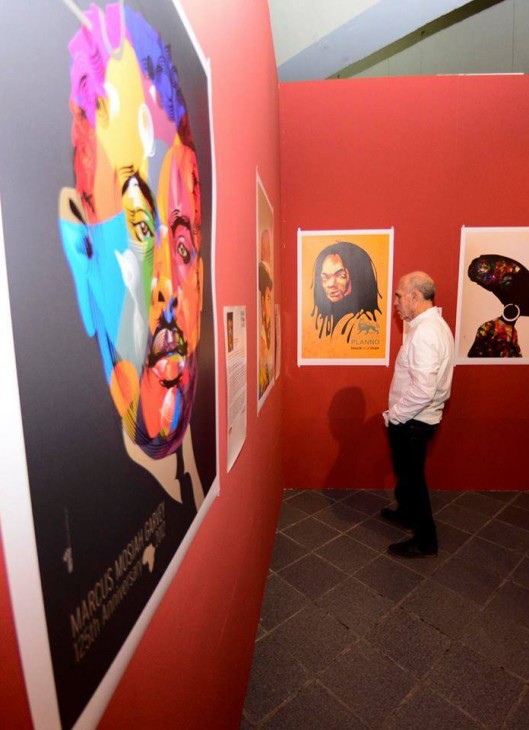 Michael Thompson, aka Freestylee, is an undisputedly gifted artist, and as you get to know him, you begin to realize that he is committed to a higher cause, namely to transforming Kingston into a global port of call. The catalyst and centerpiece of his vision is reggae, and his ultimate goal, in this lifetime, is to see a Frank Gehry caliber Reggae Hall of Fame Museum erected that celebrates the voice, vision and vocabulary of reggae and related musical genres like ska, dub, rock steady, roots reggae and dancehall. Without a past there is no present, and without a present there is no future. Michael’s vision resonates with the pulse of the future while paying full respect to the roots and lineage of reggae’s past. His mantra is a combination of heritage and tradition, of aspiration and intuition. It’s about celebrating and advocating a music that is pervasive, that’s cosmic, that’s optimistic, that’s righteous, that is a hip, healing and wholesome alembic for these tricky millennial times…

What strikes me most and continues to inspire me about Michael’s bold and selfless mission is that there are deep layers behind it. It’s a vision that involves the originators and the instigators, the heavyweights and the new pioneers. His crew, including Patricia Chin, the matriarch of VP Records, and Ted Bafaloukos have been on the frontlines of reggae since the 60s and 70s, while Michael himself has been creating his poster designs for over four decades. When you link that level of distinction and legacy with the Alpha Boys School, it’s basically a holy trinity of reggae. And the reason I am talking about all this is because I share Michael’s dedication to putting Kingston back on the map, and giving my adopted home city its proper shine. In his classic tune Here I Come, the late great Dennis Brown sang, “Surely goodness and mercy shall follow I all the days of my life.” I believe this is true for Michael and many others who are spreading the good word about their golden land. 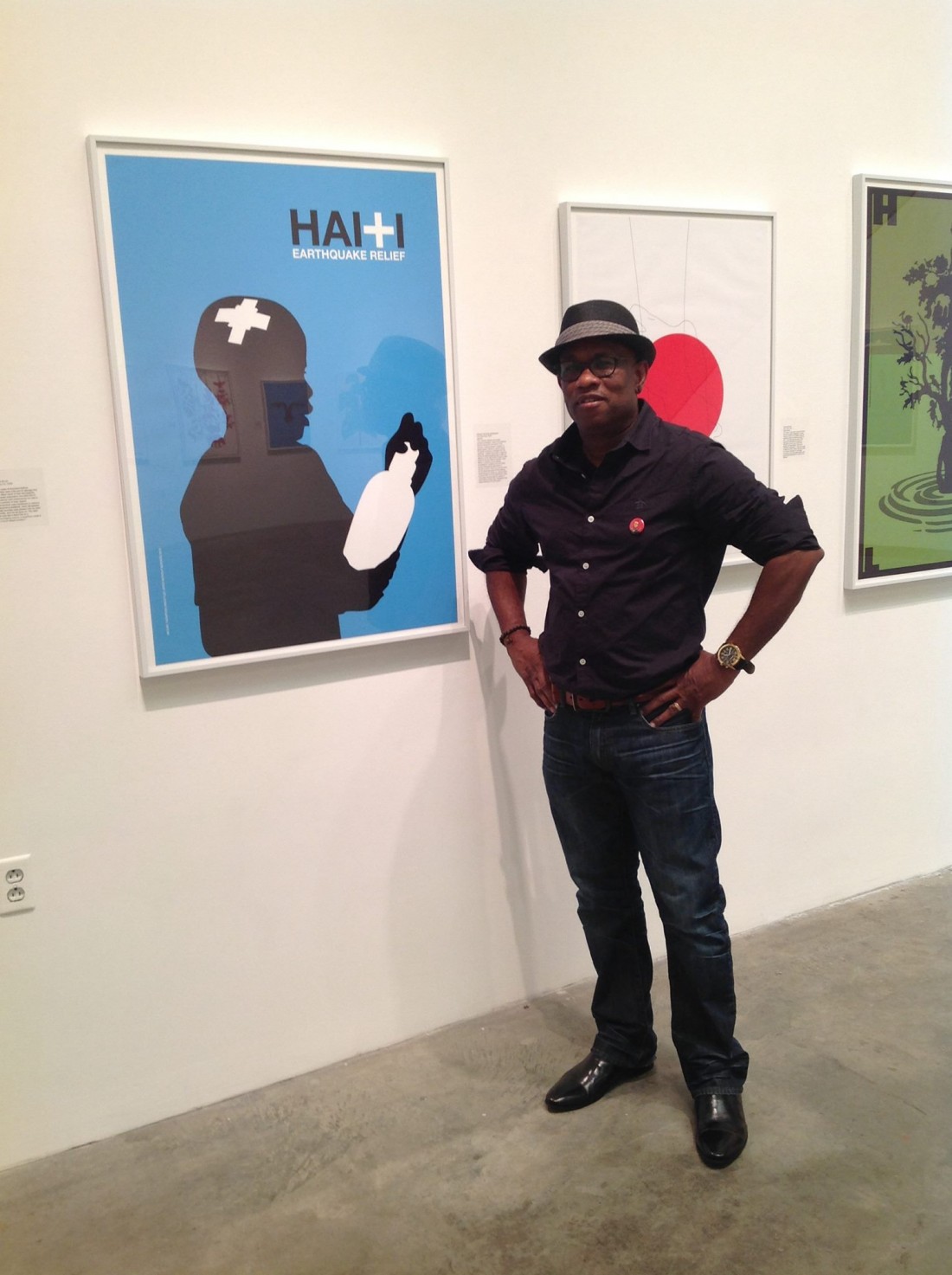 Thursday, October 10, Michael Thompson spoke about his work and career in the Museum’s Auditorium. 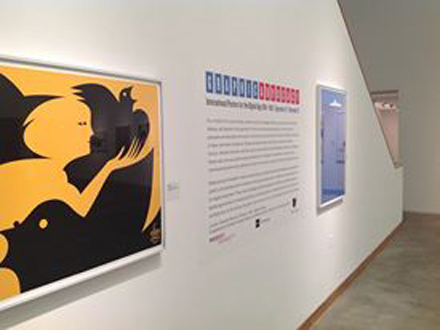 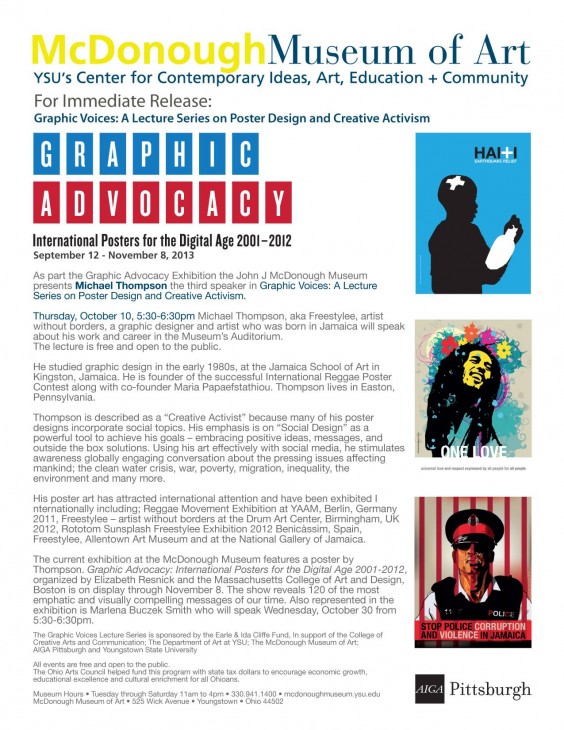 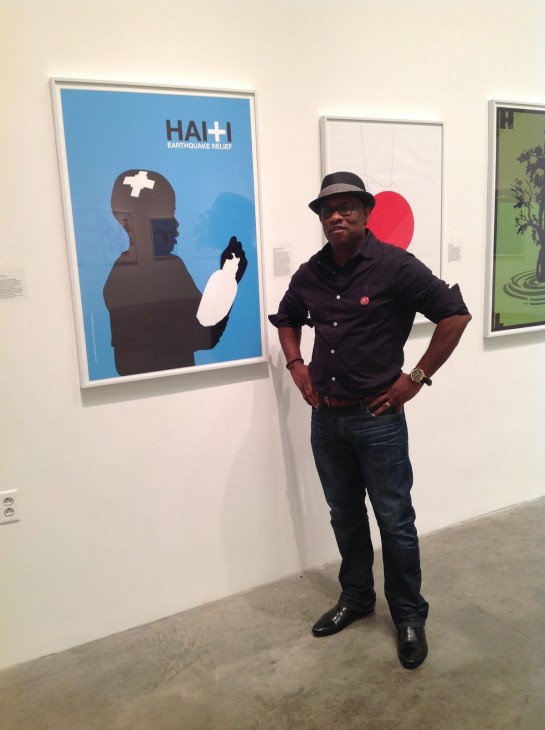 Michael Thompson Freestylee Exhibited his Reggae Poster Art at Keene Arts in Keene Valley on 27th, July, 2013. Visitors had the honor to learn about the history of Jamaican reggae and listen to great music.
Raffles of CDs, concert tickets (courtesy of VP Records) and even one of Michael’s limited edition posters to support Alpha Boys School in Kingston (The birthplace of Ska & Reggae). 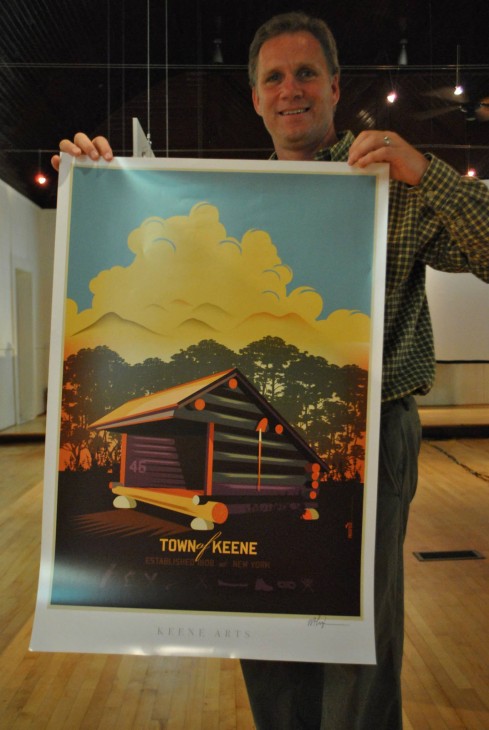 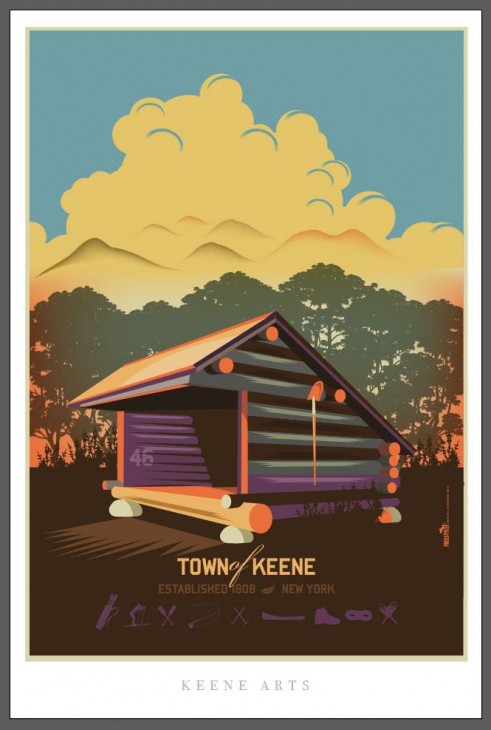 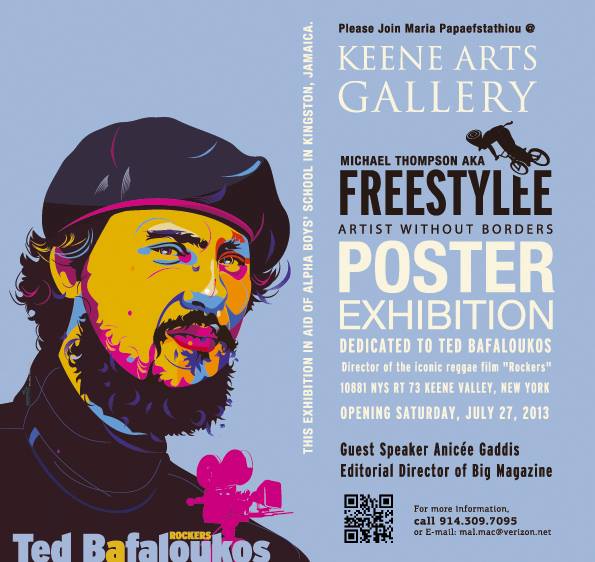 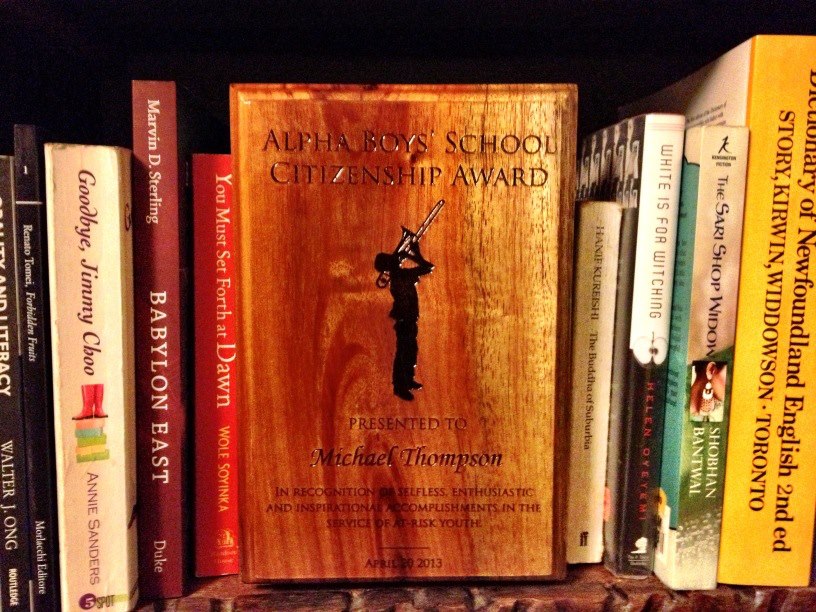 Michael Thompson recently designed and generously donated a logo for the Alpha Boys’ School which has nurtered several generations of Jamaican musicians. Sister Susan Frazer, RSM, Director of the school, first saw the illustration of the boy playing the trombone that would become Alpha’s logo at the ‘World A Reggae’ exhibition held at the National Gallery of Jamaica in September 2012. “The moment I saw Michael’s work and the image which is now the Alpha logo I instantly knew it would fit perfectly with our history and our vision for the future at Alpha,” remembers Sister Susan. “The logo has really become not just about branding but a catalyst for collective action across the Alpha community”. 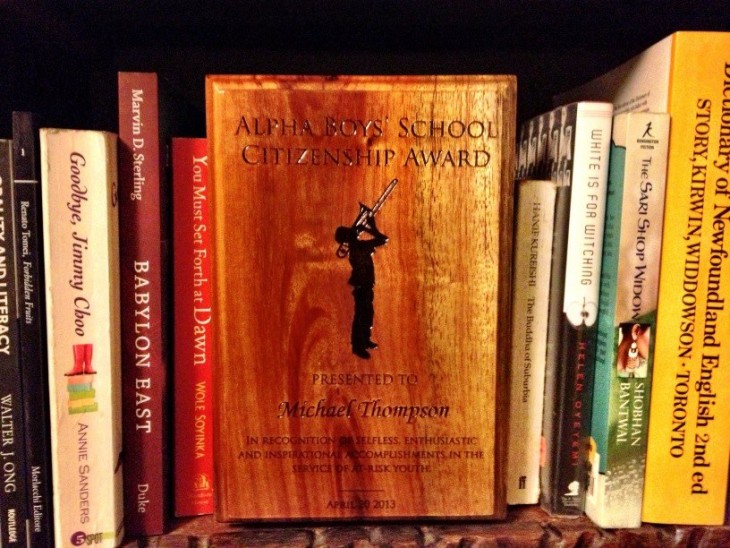 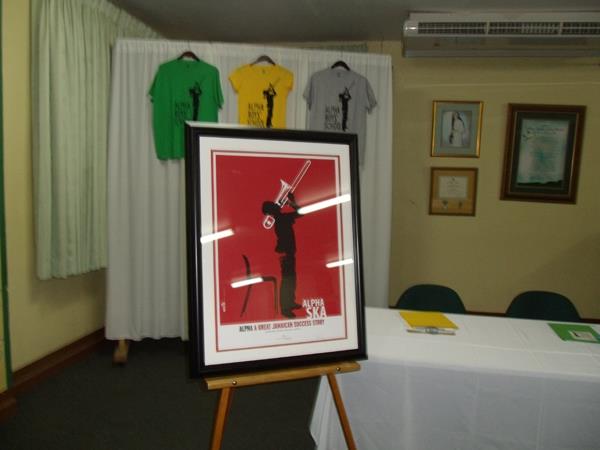 On Saturday April 20th at its campus on South Camp Road in Kingston, Alpha Boys School officially unveiled its new logo before the media as well as tshirt designs for public sale and a school shirt for students, all of which, according to Alpha staff, are a source of excitement, pride and collective action throughout the Alpha community. As a gesture of its thanks to Michael Thompson, the designer who created and donated the imagery, Alpha honored the artist with its inaugural ‘Alpha Citizenship Award’ for Thompson’s “selfless, enthusiastic and inspirational accomplishments in the service of at-risk youth” in light of the donation as well as Thompson’s work with the International Reggae Poster Contest and support of the school in the course of his personal artistic endeavors. Professor Carolyn Cooper set the tone for the evening by helping to make Alpha’s case for the use of the arts in personal and institutional development. Alpha also recognized the Bob Marley Foundation and the Jamaica Business Development Corporation for helping to develop the professional capacity and civic consciousness of present and future Alpha boys.

Talk at the University of West Indies

“Design is what we do and it’s a powerful tool that I use for a social cause.” Michael Thompson aka Freestylee.

Michael Thompson (Freestylee) spoke on Thursday, April 18 at the final in the 2013 series of Reggae Talks hosted by the university’s Department of Literatures in English at the University of the West Indies, Mona. The artist spoke about his work as a politically engaged graphic artist, his passion in reggae music and dream of a Reggae Hall of Fame build in Kingston.

Exhibition at the University of the West Indies Museum

On March 2013 Freestylee Posters were exhibited at the University of the West Indies Museum, curated by Dr. Suzanne Francis-Brown.

Dr. Suzanne Francis-Brown, says Thompson’s exhibition has attracted a lot of positive attention, both for the vibrant graphics and for the reggae music content. Visitors have been intrigued by his visualisation of the music from its early days through to its global incarnations. The exhibition remains up through the month of April, in tandem with an exhibition on the Origins of the University of the West Indies.