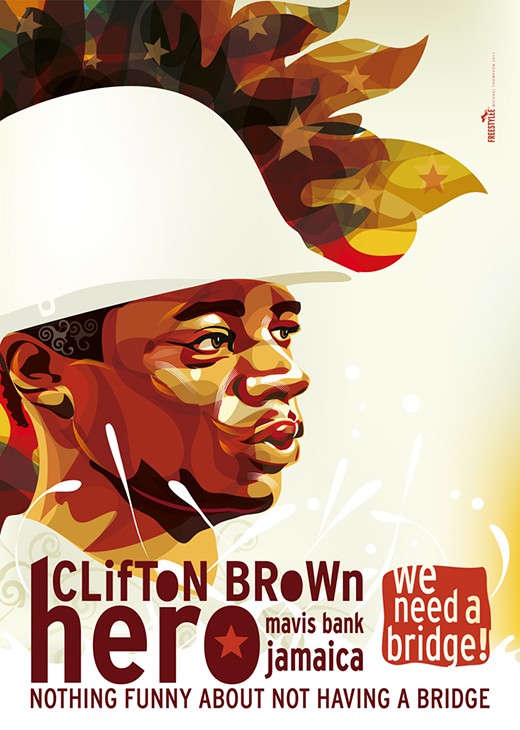 We Can Cross It! When poor people in many countries like Jamaica ask their government for necessary amenities like good roads, clean drinking water, bridges or important community services that can make their lives better, they wait in vain and are often times humiliated or ridiculed, sometimes to get attention they must block roads and demonstrate to get the authorities to listen and do something. Humiliation and ridicule is what Clifton Brown got for asking for a bridge. Clifton is from the rural coffee farming community of Mavis Bank on the Island of Jamaica. He and others put their lives in danger to help their fellow citizens of this poor rural district cross the treacherous Yahallas River that often cut them off from the rest of the surrounding communities during heavy tropical rainfall. </br> Clifton was filmed and interviewed by a local television station while providing this important yet dangerous river crossing service. Clifton in the interview tried to draw attention to the plight of the residents who are cut off by the river when it rains heavily in this mountainous Blue Mountains region. A bridge is clearly needed and residents continue to demand that the government build a bridge across the river. The interview was remixed and posted on You Tube and like many videos making fun of others it became viral. You see, Clifton speaks Jamaican patois, the comical reaction came when Clifton tried to explain in proper English the plight of his community and the inconvenience and danger they face. Later he was interviewed on a popular Jamaican TV show where the hosts continue to poke fun and laugh at him. Apparently Clifton was invited so they could continue to make fun of his accent NOT trying to help him and his community. What is evident is that there is a lack of respect for those who are trying to make a difference and who are from a poor background and cannot speak the queens english like those from the educated upper class. Yes, the edited clip may be funny, but nothing is funny when people are totally ignored and their plight and suffering turned into comic relief. Let us build bridges instead. I give thanks and support to those on Facebook www.facebook.com/WeCanCrossIt who have decided to take a leaf from Clifton’s book and have begun to do something to help the community of Mavis Bank. I salute them. I Big Up Clifton Brown, he is a hero in my book.