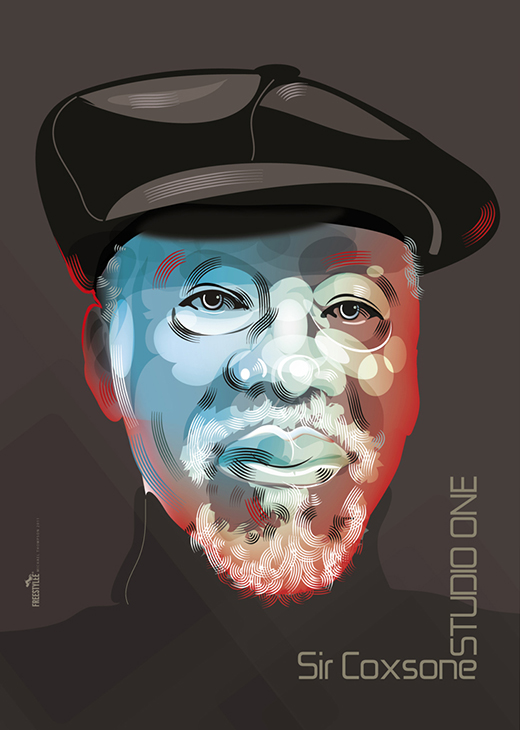 Clement Seymour “Sir Coxsone” Dodd, CD (Kingston, Jamaica, January 26, 1932 – May 5, 2004) was a Jamaican record producer who was influential in the development of Ska and Reggae in the 1950s, 1960s and beyond. He received his nickname “Coxsone” at school: because of his teenage talent as a cricketer, his friends compared him to Alec Coxon, a member of the 1940s Yorkshire County Cricket Club team.

When the R&B craze ended in the United States, Dodd and his rivals were forced to begin recording their own Jamaican music in order to meet the local demand for new music. Initially these recordings were exclusively for a particular sound system but the records quickly developed into an industry in their own right. In 1959 he founded a record company called World Disc. 1962 he produced the Jazz record I cover the water front on the Port-O-Jam label, two of the musicians who played on the album, Roland Alphonso and Don Drummond became founding members of the Skatalites one year later. In 1963 he opened Studio One on Brentford Road, Kingston.[2] It was the first black-owned recording studio in Jamaica (see 1963 in music). He held regular Sunday evening auditions in search of new talent, and it was here that Dodd auditioned Bob Marley, singing as a part of The Wailing Wailers. He gave the group a five-year exclusive contract, paying them £20 for each song they recorded; for a time, Marley slept in a back room of the studio. The Marley-penned song Simmer Down, a Dodd production, went to number one in Jamaica in February 1964. However, he became notorious for rarely paying the band the money they were owed for the record sales, and as a result the group were living in relative poverty despite being household names in Jamaica. This eventually became their catalyst for leaving the label. <br><br> During the late 1960s and 1970s, the ‘Studio One sound’ was synonymous with the sound of ska, rocksteady and reggae, and Dodd attracted some of the best of Jamaican talent to his stable during this time, including Burning Spear, Ras Michael, Delroy Wilson, Horace Andy and Sugar Minott. He continued to be active in the music industry into his seventies, and on May 1, 2004 Kingston’s Brentford Road was renamed Studio One Boulevard in a ceremony which paid tribute to his accomplishments as a producer. He died suddenly of a heart attack four days later while working at Studio One. <br><br> Dodd was posthumously awarded the Order of Distinction, in the rank of Commander on October 15, 2007, for service to the Jamaica music industry.