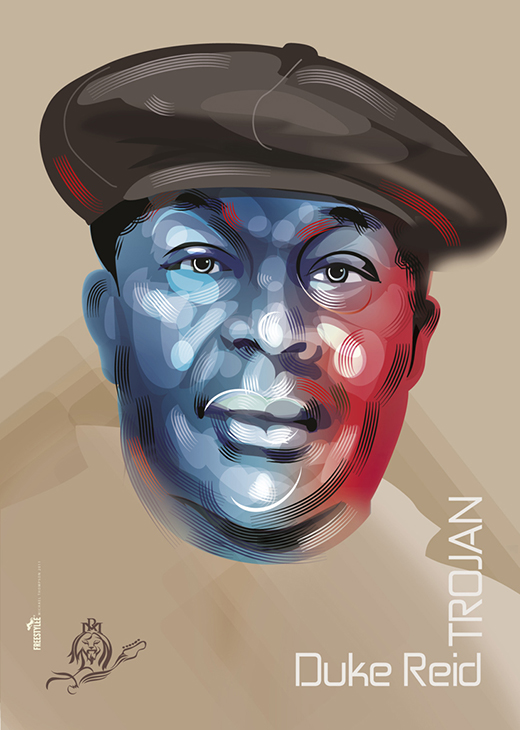 Reid was born in Portland, Jamaica. After serving ten years as a Jamaican Police officer, Reid left the force to help his wife Lucille run the family business, The Treasure Isle Grocery and Liquor Store. </br></br> He made his way into the music industry first as a sound system (outdoor mobile discothèque) owner, promoter and disc jockey. He quickly overtook Tom the Great Sebastian and his sound system as the most popular sound system in Jamaica. Soon he was also sponsor and presenter of a radio show, Treasure Isle Time. A jazz and blues man at heart, Reid chose “My Mother’s Eyes” by Tab Smith as his theme tune. Other favourites of his included Fats Domino, a noticeable influence on the early Reid sound. </br></br> Early Reid productions were recorded in studios owned by others, but when the family business moved from Pink Lane, Kingston to Bond Street, Reid set up his own studio above the store. He became proprietor of a number of labels, chiefly Treasure Isle and Dutchess (his spelling). Much of his income derived from licensing agreements with companies in the UK, some of which set up specialist Duke Reid labels. </br></br> He dominated the Jamaican music scene of the 1960s, specialising in ska and rock-steady, though his love of American jazz, blues and soul was always in evidence. Reid had several things going for him that helped him to rise to prominence. He made a concerted effort to be in the studio as much as possible, something his counterparts did not do. He was known as a perfectionist and had a knack for adding symphonic sounds to his recordings and producing dense arrangements. Furthermore, his records were considerably longer than those being produced by his rivals. His tunes often broke the four-minute barrier, while most ska songs were barely longer than two minutes. The material that Treasure Island issued exemplified the cool and elegant feel of the rocksteady era.