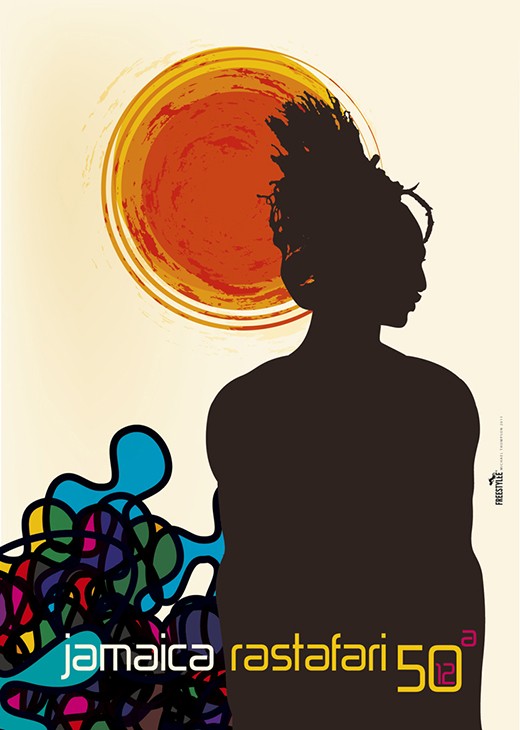 We cannot separate the Rastafari journey from the Jamaican experience or the journey of our national music. Brand reggae and brand Jamaica are very much intertwined with the vibe and messages of the Rastafari movement. Jamaica 50 is also in essence Rastafari 50. This poster ties the two journeys and experiences into a singe poster. </br></br> Jamaica will turn 50 on August 6, 2012, it will be 50 years since the Island nation in the Caribbean gained its Independence from Britain. The people of Jamaica will celebrate its achievements as a people and a country. One of the most important movements to rise up out of the ashes of slavery and colonialist oppression is the Rastafari movement. A movement and a way of life that has found the hearts of many in the global community, The movement which grew out of the “Dungle” of West Kingston’s poverty stricken slums, and the mountains of Pinnacle; has now grown to become an International movement spreading from the Caribbean, Europe, North America, Latin America, Asia and Africa embracing all races. Through the powerful vocals of Rastafari messengers, the liturgy of One Love, Redemption, repatriation and African Unity is spread to all humanity, great singers like Burning Spear, Bob Marley, Peter Tosh, Culture, Dennis Brown and many others have taken that powerful message to oppressed people seeking mental and physical liberation from inequality and oppression. This I think is Jamaica’s greatest gift to the world, As Jamaicans we should celebrate this in a big way, It is out of this marginalized and oppressed levity that Jamaica can find redemption and unity. However, very little will be made of this movement’s achievements beyond the iconic Bob Marley in the official speeches and awards ceremonies. </br></br> I hope it is still early yet for Jamaica to recognize the great contribution of people like Leonard Howell, Joseph Nathaniel Hibbert, Archibald Dunkley, Mortimo “Kumi” Planno, Jah Lloyd and others who have sacrifice greatly through state prosecutions to build the foundation on which the modern Rastafarian movement flourishes toady. I hope the Jamaican government will apologize for it’s treatment of Rastamen and Rastawomen over the past 50 years; moreover recognize the great contribution these men and women have made to Jamaica and the world.