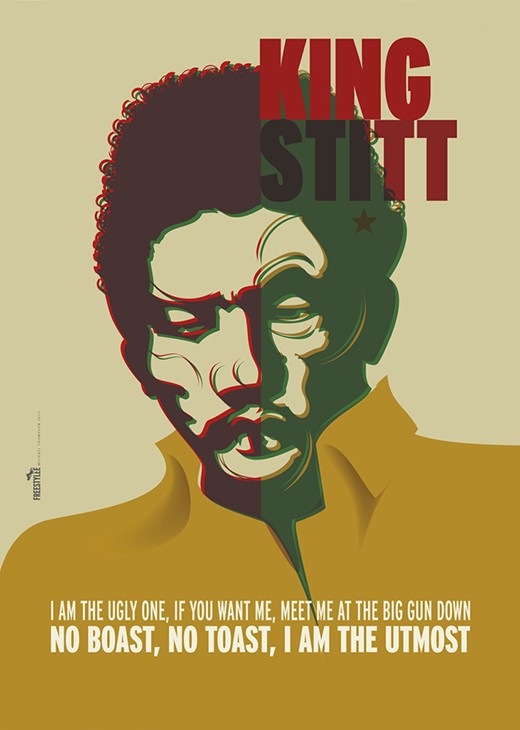 <strong>RIP First King of Toasting</strong> </br> He earned the nickname as a boy because of his stuttering and decided to use it as his stage name. Stitt began deejaying on Clement Dodd’s Sir Coxsone’s Downbeat Sound System in 1956. </br> Count Machuki, the original Jamaican deejay, noticed him for his dancing and offered him to try his hand on the mic. Stitt soon built his own deejay set, occasionally replacing him and eventually becoming one of the most popular deejays on the island’s dances. He became King Stitt when he was crowned ‘king of the deejays’ in 1963. in the heyday of ska.

Following the folding of Sir Coxsone’s Downbeat’s sound system around 1968 (as Coxson prefered to concentrate on recordings), Stitt found himself working as a mason in Ocho Rios. [citation needed] He had been deejaying at the mic for over ten years when he was first recorded over brand new reggae rhythms in 1969, creating some of the first deejay records ever. </br></br> Born with a facial malformation, Stitt took advantage of it, calling himself “The Ugly One”, in reference to the Sergio Leone spaghetti western film, The Good, the Bad, and the Ugly. His first and most prolific record releases came from producer Clancy Eccles with classic deejay tracks like “Fire Corner”, “Lee Van Cleef”, “Herbman Shuffle”, “King of Kings”, “Vigorton 2” and “Dance Beat”. All were released on Eccles’ Clandisc record label.