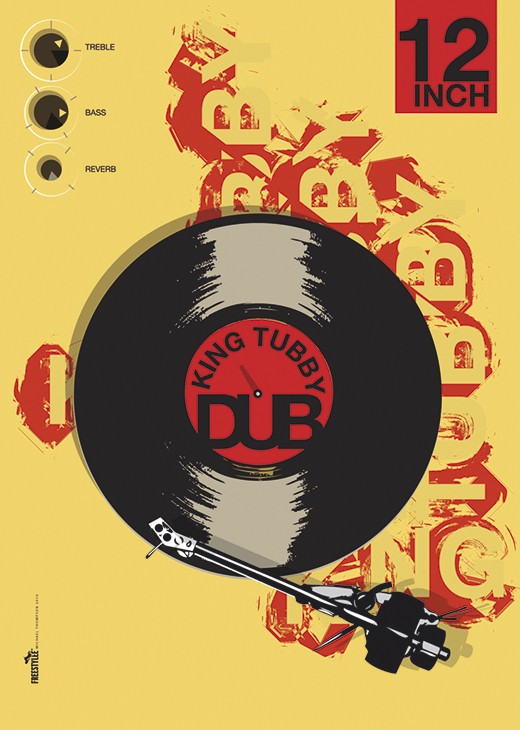 King Tubby is our master Jamaican composer, our dub Beethoven. His name is know globally and considered the undisputed “King of Dub”. This poster puts him in the center of our sound system and dub consciousness. This is just one of the many posters I have designed to capture this trully Jamaican innovator. In any museum on our popular music King Tubby would certainly become a central figure that would attract enormous interest. King Tubby is a giant in the history of sound system and Dub.

<strong>Dub</strong> </br> King Tubby’s music career began in the 1950s with the rising popularity of Jamaican sound systems, which were to be found all over Kingston and which were developing into enterprising businesses. As a talented radio repairman, Tubby soon found himself in great demand by most of the major sound systems of Kingston, as the tropical weather of the Caribbean island, (often combined with sabotage by rival sound system owners) led to malfunctions and equipment failure. Tubby owned an electrical repair shop on Drumalie Avenue, Kingston, that fixed televisions and radios. It was here that he built large amplifiers for the local sound systems. In 1961/62 he built his own radio transmitter and briefly ran a pirate radio station playing ska and rhythm and blues which he soon shut down when he heard that the police were looking for the perpetrators.[1] Tubby would eventually form his own sound system, Tubby’s Hometown Hi-Fi, which became a crowd favourite due to the high quality sound of his equipment, exclusive releases and Tubby’s own echo and reverb sound effects, at that point something of a novelty.