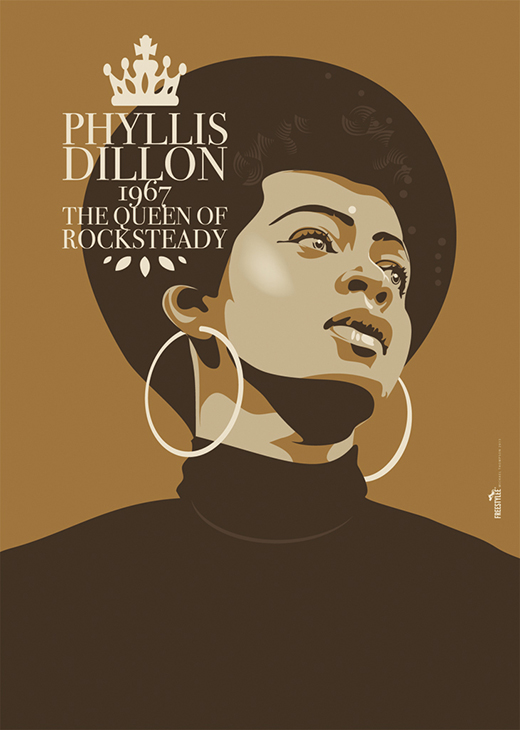 Dillon was born in 1948 in Linstead, St. Catherine, Jamaica.Influenced by American singers Connie Francis, Patti Page and Dionne Warwick, she began singing in talent contests. It was during a performance at the Glass Bucket Club in Kingston, Jamaica with the group The Vulcans, that Duke Reid’s session guitarist Lynn Taitt discovered Dillon. </br></br> Dillon was 19 when she recorded her first record for Duke Reid. In 1967, Reid released Dillon’s “Don’t Stay Away”. While most of Dillon’s subsequent recordings would be covers of popular and obscure American songs including Bettye Swann’s “Make Me Yours”, Perry Como’s “Tulips and Heather,” The Grass Roots’ “Midnight Confessions,” and Stephen Stills’s “Love the One You’re With”; “Don’t Stay Away” was an original composition featuring Tommy McCook and the Supersonics as the backing band. </br></br> Another original song, “It’s Rocking Time” would later be turned into the Alton Ellis’ hit “Rocksteady”. While these early recordings demonstrate Dillon’s mastery of the rocksteady sound, a much slower, soulful, response to the sultry weather that made ska’s upbeat rhythm and tempo undesirable even impracticable, it was no indication of her greatest performance, 1967’s “Perfidia”. Popularized by the American surf rock band The Ventures, “Perfidia” is a 1940 song written by Alberto Domínguez and made popular by the Cuban bandleader, Xavier Cugat.