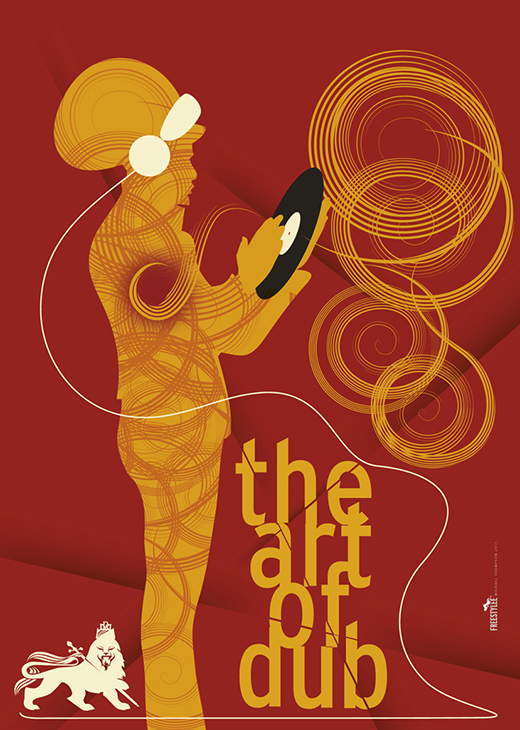 Paying tribute to the Jamaican “sound system” and the “Art of Dub”. Dub is very much alive today, especially in Europe and has evolved into an powerful art form amongst a new generation of young sound engineers and producers who are now following in the creative footsteps of the great Jamaican practitioners and innovators of the genre. Osbourne “King Tubby” Ruddock, Lee “Scratch” Perry, and Errol Thompson and others have left a significant global legacy. Today an entire industry has develop around this sound, resurrecting the humble vinyl, precisions turntables and pre-amps. Dub has even spawned a new form of music, called Dubstep. This new genre has spread globally as well from its roots in the urban streets of UK to Asia and the Americas. I designed these two posters to capture the powerful dub energy, the movements and to reconnect the music to its Jamaican roots. </br></br> Featuring Lynval Golding of the Specials, King Tubby, Sir Coxsone and Carl from Quaker City who played his first dance in 1963, Sound System traces the origins of sound system culture from its roots in Jamaica to its beginnings in England in the 60’s and its role in uniting disaffected black British youth in the 70’s. The program touches on the positive social impact of sound system culture on black society in Britain and its influence on the development of a definitive Black British identity. Finally the program looks at how sound systems contributed to the birth of rave culture in the 80’s.